A Frog, Food, and Cajun Culture: A Trip to Louisiana

I arrived home at about midnight this morning after a 10-day trip in Louisiana. The primary reasons for my visit were to see family, and to work on a romance novel and the third Detective Games entry; although it became a great deal more.

A young alligator surfaces near a walkway 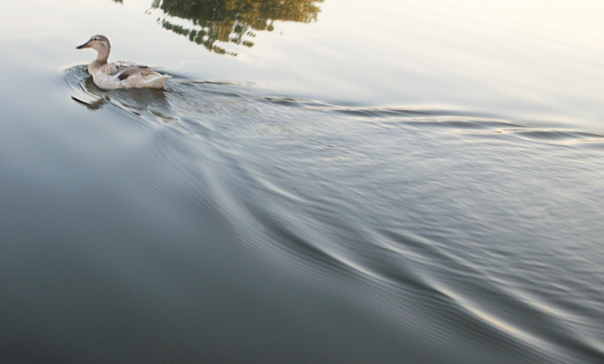 A duck makes waves as we pass by in a canoe.

As I was equipped with a Kodak Easyshare, and aboard a rickety canoe, I wasn’t able to capture as clear images as I had desired. I utilized the GIMP sharpen mask to try and get things back into shape.

The Horse and Rider

A rendered shadow of a horse and its rider. Albeit it could use a touch-up here and there.

I was searching through my photography and video collections, in hopes of finding something worth posting (and catching up with what posts I’ve missed in the postaday2012 challenge), when I had the idea of capturing a frame in one video, upon seeing the shadow of a horse and I. With GIMP, I added some extra effects to bring the graphic “to life,” although not without the consistent combo of CTRL | CMD + Z (undo). The scattered bits of pixel are due to a mishap with the “magic wand.”

A photographic medley of France. I incorporated flowers from Monet’s Garden in Giverny and the memorial cross of Joan of Arc in Rouen. ©2012 Zechariah Barrett – All Rights Reserved.

At 33,487 words and eleven chapters, the primary story is completed, with only the epilogue left to wrap up which I estimate will be about three chapters long and should be finished on schedule (God willing).

What do you see in this picture? I cropped this image from a photograph I took in Colorado. It’s the shadow of a horse named Trainer. As my book, it is not yet fully defined.

Jake looked up in trepidation at the enormous boiler before him from which all sorts of wicked mists were produced. It hissed with the malevolence of the fiercest cobra, and its inward flame roared like a hungry lion.

Burbero stood behind Jake, observing his reaction with a laugh. “Oho! It’s not all bad as that, stowaway. She grumbles like my Nonna, but has the temperament of a dove!”

After meeting my writing quota today, I made a teaser for my novel via Garage Band and iMovie. Made for the fun of it, not to attract readership.

The first sentence of the prologue is revealed: “I woke to the sound of the crashing waves.”

The animation reveals two of the novel’s primary locations.

I posted an excerpt to the novel here.

Up the Mangled Tree: Leaning on Firm Ground (II)

“We found this tree while searching the mountainside for our kayaking destination. I struck me as peculiar and I decided to snap a pic while stumbling over the steep, rock-strewn slope.” And boy was it steep at times, or perhaps it only seemed so, since I was attempting to take decent compositions along the way while keeping up with our party. Note the blur in the upper-left hand corner, tis’ evidence of my… “gracefulness.”

The Likeness of a Pear

At the moment, I’m focusing on refining my still-art skills through Art Academy.

Via today’s lesson, my subject is a pear, which has been placed in grayscale for an easier model.

My sketches have been rough at best, though improvement is on the horizon!

In order to prevent confusion with other organizations, my novel now has the working title: Project Ordine. The changes will be in effect on the site very soon.

Below is an excerpt from the seventh chapter. Certain names have been replaced [ ] with more generic appellations in order to prevent certain plot points from being revealed:

Romanesque – it is a word with fantastic image inducing qualities capable of sending one back in time to an era of much finer and more elaborate architectural design. It exudes curving forms and engraved figures, dramatic arches and extraordinary proportions. In these regards, romanesque is the perfect word to describe the [Enemy] headquarters in Siberia.

Why someone would ever desire to build a base in Siberia is beyond me, [Susan] thought to herself as a fierce chill overcame her and the agents around her. Moments ago they had descended from their assault chopper when the rotor, too, seemed to whine in complaint as the cold set upon it. Now they were in the blinding white of a Soviet Union wasteland, attempting to locate the hiding place of the infamous [Moriarty de Mort]. In such a place it felt as if time itself stood still, lost in oblivion – it was no wonder the German troops had so readily lost their ground in World War II, for it was such a surreal and bitter setting. Another gust of wind ravaged their party, albeit this time it served some use. The snow momentarily parted before them, revealing an ominous monolith in the distance. They had arrived.

The first imagery presented in my novel is that of crashing waves (and a rude awakening to boot). Within the prologue, it sets a mysterious tone for the novel, albeit does not come to fruition until the seventh chapter. It was also the first passage I turned to when I began systematically revising my novel for stylistic disruptions.

Below are photographs I’ve taken on my travels, any guess as to where? Or what [type of] body of water? The answer may seem surprising.

A beautiful portrait of the interweaving hues of blue, lapping against the shore with great tranquility.

This crop is my favorite of the two, albeit not the one used for my “working cover,” due to size restrictions. The scope of the waves, and the flow of the water is much more comprehensive.

The location was by far not the most striking, as Oregon, Ireland, or France. Although I attained some nice compositions, with some slight altering to return them to their intended beauty.