You play as the angel Pit, following the orders of Palutena, the goddess of light and protector of

humanity, as you fight against the resurrected Medusa. Your journey takes you from towns to spaceships, futuristic landscapes to ‘natural’ wonders – each equally captivating, with an added vibrancy due to the extra dimension of 3-D. The story, however, does not end after your primary objective, taking an unexpected turn and extending gameplay exponentially as a result. Chapters may also be replayed at different intensity levels, from practically effortless to an infernal onslaught which may pose a challenge for even the most experienced of players.

Ease of gameplay has been disputed among players, however, it is certainly do-able. Albeit more suited to right-handed players, lefty’s should by no means be deterred, as only simple swipes of the stylus are required of their right hand. As a left-dominant player myself, I found the game to be difficult at first, albeit much easier after the first few missions had accustomed me to the configuration – no adjustment of the controls was necessary, albeit Nintendo has provided that as an option in addition to the circle-pad pro.

The soundtrack of Kid Icarus: Uprising is incredibly beautiful and uniquely assorted. From soothing orchestral, violin accompanied tracks, to simple ditties which serve but a momentary purpose – all serve to heighten the enjoyability of the game and immerse the player within the world of Greek myth. Not to mention, each piece is made available as an unlockable, by the completion Treasure Hunt achievements (which also reward hearts, weapons, idols, etc).

Dialogue is a key characteristic of the game, seemingly present without ceasing. Albeit, it rather serves as a compliment to gameplay, once a player is acquainted with the controls and may appreciate the witty repartees and mindless jabber with comprehension. Otherwise, they are aggravations at best. Once, however, this condition has been met, the dialogue maintains interest in a seemingly empty world (aside from the attacks of underworld minions), where there is little character interaction, aside from these exchanges. 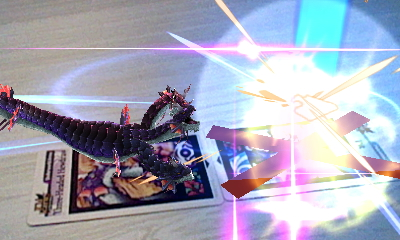 The content of Kid Icarus: Uprising is truly abundant. With 25 chapters, unlockable back-to-back boss battles, dozens of weapons (to be bought with hearts, the KI:U currency) and power customizations (and a land + battle practice range to try them out on), three treasure hunts with one-hundred twenty achievements each, collectible in-game and paper-card “idols” (digital figures with descriptions and AR Card capabilities), streetpass-spotpass enabled, online / local multiplayer, and much more. Albeit some features are more engaging and useful than others.

Multiplayer is a competitive challenge, although there are no overall leaderboards, which is a letdown. Players accumulate points during the process of each match and are ranked according to their totals at the conclusion. Wins are saved and exchanged via streetpass.

The characters within KI:U aren’t exceptionally frightening, albeit some are notably grotesque, such as the lord of the Underworld – with pointy fangs, red eyes, and whatnot. There is no blood, and most combat is against the forces of the underworld, in the form of giant eyeballs, frog-like beings, and other odd but otherwise inhuman creatures. There are, however, a few human / god encounters where a character will make known they have been defeated and may even make a corresponding exclamation of defeat. However, deaths are seldom, often with enemies returning to fight again unscathed. Albeit, this does not dismiss the violence in itself. The game is likely more suitable for tweens, teens, and older, than ten year-olds, unless families take care to monitor their child’s gameplay and discuss plotline implications. There are a few  sexual references – in one instance, Palutena jokingly tells Pit she can read minds and that he “better not be thinking anything naughty,” to which he exclaims in surprise, as if he had been contemplating unsavory matters. Some characters, such as a Nature-Force leader is flirtatious, while Amazon Pandora takes it a step further, emphasizing her appearance and is overtly coquettish.

The fact that there are collectible “idols” should be telling in itself of the game’s religious affiliations. Rape, murder, and other mature concepts of Greek mythology are not mentioned, however, spiritual references are made. Pit “prays” for Palutena’s safety, at which point another goddess remarks he is a very confused angel, since he has no god/dess to pray to at the moment. A reincarnation of Helios, Hades, Medusa, and Poseidon (as well as others) make appearances, with a few original gods and goddesses exclusive the Kid Icarus realm. Pit is the protector (by extension of Palutena) of the helpless humans who are referred to as selfish and greedy, the gods are also revealed in their folly (often warring against one another and causing trouble).

capability for the Nintendo 3DS camera application (in AVI video format, which should mean easy uploading), Nintendo Zone (think of it as a much larger and expanded Download Play), and Mii Plaza updates (a Find Mii sequel, achievements section, and more).

The new video capability for the 3DS is a most intriguing aspect for me, and the feature certainly works well enough, with a decent resolution and evident depth, such as in the 3DS videos displayed on the Nintendo Show 3D.

It certainly marks one of Nintendo’s best updates!

Nintendo seems to be on a roll as they release their second freebie (excluding the Ambassador Program’s 20 free games) to anyone with a Nintendo 3DS system and a Wi-Fi hotspot or Wireless Internet connection.

This time around its The Legend of Zelda™: Four Swords Anniversary Edition, originally the 2003 installment of the Zelda series – this one is definitely worth downloading if you have found such titles as Mega Man [Battle Network, Star Force, Zero, etc.], Mario [Land, Party, etc.], or other such “classics.” With plenty of gear to mess around with and bonus levels to achieve, Four Swords is a fun game to play in your spare time, requiring little commitment as gameplay works on a level-by-level basis.

Check out all the official details on Nintendo’s Official Site.

For this week’s Weekly Photo Challenge, we have two comedic images, made using the Face Raiders game on the Nintendo 3DS.

Everything seems to be in 3-D nowadays, so why not a pomegranate? 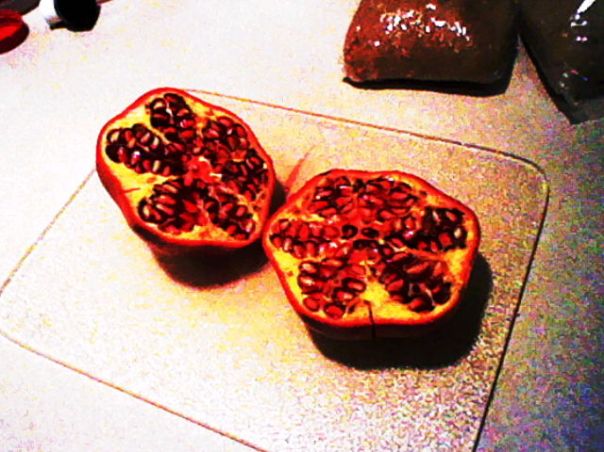 3-D Photograph of Pomegranate - 3DS or 3D Monitor Required for Proper Viewing (Kinks being worked out).

The question is, why a pomegranate?

After having eaten pomegranate at a family gathering, I’ve had a bit of a craving for this most elusive fruit… and tonight I finally had the chance to enjoy a reunion!

A normal, 2-D photograph of a pomegranate... looks much better actually.

To claim these titles, simply follow the instruction below:
Each of these titles were produced before the year 2000, and may easily be considered “classic games.” There is little instructions for new players, and you are expected to figure out things on your own – such is the way of the classics.
To receive continual updates regarding the Ambassador Program, be sure to download the Ambassador’s Certificate and activate SpotPass.

DISCLAIMER: 3D images may only be viewed on compatible 3D-viewing devices.

In an e-mail to Nintendo DS News subscribers today, Nintendo announced that it would be lowering the new Nintendo 3DS system’s retail price from a hefty $249.99 to

an unforeseen $169.99, closer to that of the DSi’s $149.99. Although this is great news for potential buyers of the 3DS, it presents a potential aggregation to current owners which have already paid the originally immemse sum. To this, however, Nintendo has an answer.

The Ambassadors Program, in effect September 1st, will be open to all current 3DS owners that visit the Nintendo eShop at least once on their 3DS systems before midnight (EST) on August 11th (day of the price drop is Aug. 12th). This program will provide ambassadors with twenty (20) free Nintendo eShop games, including Super Mario Bros.™, Donkey Kong Jr.™, Balloon Fight™, Ice Climber™ and The Legend of Zelda™, both before and after they are released to the public. The remaining ten games, Nintendo states,

…will be available exclusively to Ambassadors, and Nintendo currently has no plans to make these 10 games available to the general public [outside of the program] on the Nintendo 3DS in the future.

At the end of the announcement, Nintendo adds,

More details about this program will be announced in the future.

Which will provide for some great anticipation as to the other unnamed titles.

You can read the full article posted by Nintendo here.

As a member of the ambassador program, I’ll provide details and reviews on these releases as they happen in the month of September.

As mentioned before, Nintendo has joined up with Netflix to provide a video streaming service program, free of charge, on the Nintendo eShop. Once downloaded however, a Netflix unlimited membership ID will be require, so if you aren’t already paying for a membership then the service is of no use.

In other news, tomorrow I’ll likely be posting my review of Transformers 3! An interesting movie to be sure… had mixed impressions before entering the theater and left with a totally contrary impression of the film.